Fire of the Covenant Excerpt

Below is an excerpt from Fire of the Covenant, the first book in the Dragon-Called series. One of the twins, Willoe, and her cousin Casandra flee from a banquet. They make their way to a deserted courtyard where a blinding light appears, and they are confronted by a lady in white riding a golden dragon. 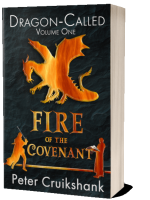 A shimmering light continued to flicker around the shining woman and dragon as Willoe heard a soft, but clear voice say, ‘Willoe Brynmor.’ It was not a question, but a statement. Willoe realized that the woman hadn’t actually spoken…the words had appeared in her mind.

“Who…what are you?” Willoe asked hesitantly. Her body wanted to flee from this strange apparition, but she was held in place.

The woman ignored Willoe’s question, but the dragon tilted its head, and its scales stood on end in a quick-moving ripple, spreading out then falling back into place. It took two steps toward Willoe and Casandra, the woman’s body rocked with the movement.

Every nerve in Willoe’s body wanted to flee, but as the dragon moved closer it brought the glowing woman into better view. Willoe noticed that the only part of the woman’s body that was not a shimmering white were the eyes. Where black should be, small flames of red and orange flickered. Willoe realized that Casandra gripped her arm, but still stood there, nonetheless. It was enough to keep Willoe from running.

The woman’s lips never moved, but Willoe could hear her words clearly. ‘Willoe Brynmor. Thou hast been called and thine ancestor’s promise binds thee to respond.’

Willoe wanted to say something but stood frozen. Her mind spun as she tried to comprehend what the specter’s words meant. After a few moments she was finally able to speak, though she had to swallow first. “What ancestor? What promise?”

The radiant light around the woman and dragon started to brighten. ‘The time has not come for thee to know. Prepare thyself, many trials await thee. The Darkness will try to consume thee and all that thou lovest.’

“What Darkness? How do I prepare?” Willoe asked in confusion, but instead of an answer the light grew, filling the entire courtyard, making both her and Casandra throw their arms up as before. The inner voice came one more time before the light flickered and disappeared altogether. ‘Thou wilt know when the time is right; then thou must find the Lady in the Woods.’

With the woman’s disappearance the night returned, but Willoe blinked several times to get rid of the residual brightness from her eyes. The light from the torches felt inadequate compared to what the two women had just experienced.

Casandra finally let go of Willoe’s arm and turned toward Willoe, her face still frozen in shock. “I heard you talking. Did she say something to you?”

Willoe was amazed at her cousin. “Of course, you didn’t hear?”

“No. I heard you, but nothing from the—” The look on Casandra’s face was nearly as white as the shimmering lady.

“She told me about a promise one of my ancestors made that I am somehow now responsible for.”

“What was the promise?” Casandra sounded even more surprised by what Willoe reported than the appearance of the shining lady.

“I have no idea. But I am supposed to find ‘the Lady in the Woods.’”

“I heard you ask about her. Who…” Casandra started but stopped as Willoe shrugged her shoulders before her cousin could finish.

They both stood there for a short time facing into the courtyard, staring at where the woman and dragon had been. Casandra turned back to Willoe and asked in a soft and reverent tone, “Do you think that was…” She let the question hang between them.

“Wil, is that you? Are you well?” a voice called out from the dark and then Rowyn walked into the light of the sconces. A moment later Dougal came into view behind him.

“Row.” Willoe suddenly felt relieved, as if the two men brought a sense of reality back to what her life. “Yes, we are fine.”

“Someone said you had gone for a walk around the portico. We were following and from the other courtyard…” He pointed to the next courtyard over. “We saw a light like the sun had just risen,” Rowyn said as he walked over to them while Dougal walked around the courtyard suspiciously checking it out.

Rowyn’s words caught Willoe by surprise, but it also validated that what had just happened wasn’t something Casandra and she had imagined. She struggled for the right words, then just said, “We saw a lightning bolt a few moments ago.”

Rowyn looked up into the sky. It was a clear night. Then he stared down back to Willoe with a quizzical look.

“Row, could I get you to do something for me?” She moved closer to him so Dougal couldn’t hear.

“What do you need?” He leaned closer to her.

“Do you think you could ask Uncle Brom about someone called the Lady in the Woods, without raising too many questions?” She put a hand on his shoulder as she smiled.

Rowyn straightened and looked at her, his eyes narrowed as he asked warily, “Who is the Lady in the Woods and why do you think Uncle Brom would know of her?”

“She doesn’t know who it is,” Casandra interrupted. “That is why she wants to find out about her.”

Willoe nodded. “Uncle Brom has traveled extensively all over Taran. At least, that is what he has told us when he returns from his trips. And he is more knowledgeable of our history than anyone else we know. If he has not heard of this lady, then I imagine no one else has.” Her hand lowered to his arm, and she squeezed it. “But don’t tell him what we know. I just don’t want anyone else to know just yet. I just need you to trust me right now.”

Rowyn thought for a few moments, his head lowered; then he raised it and grinned. “If you think it is important, then I’ll try.” His grin widened. “It shouldn’t be a problem telling him what I know, as I know nothing. But you need to tell me what’s going on later.”

“I promise.” She returned his smile. “I’m not sure, but it might have something to do with the ancients or the Burning Lady.”

Rowyn’s eyes opened wider, and he started to speak, but Willoe cut him off.

His lips wrinkled and he stared at her for a moment, then nodded.

The three of them started back along the portico and as they came up to Dougal, Willoe let the other two go a few paces ahead.

The Protector fell in step next to her.

She looked up at him and he looked back. “The same scent,” she said softly.

He only nodded and then stared forward as they started back to the Great Hall.

As they walked, Casandra looked over her shoulder at Willoe; her cousin was biting her lower lip. Willoe just nodded at their shared secret. She hoped she hadn’t asked too much of her twin and wished she could tell him about the shining woman, but she wasn’t even sure what to tell him. To recognize what both she and Casandra suspected was beyond comprehension, but she couldn’t deny what they had both just seen. She wanted to find Cleric Yoan, but knew she couldn’t talk about this, even with him. Among all the people she knew, he would know the answer, but she was already pretty sure that no one had ever actually described an image of the Burning Lady.

Click Here to find out more about Fire of the Covenant
Table of Contents
Previous: Chapter 14: Daughters