Beams of moonlight shown through the stained lace curtains and broken shutters. It lit Julia’s face as she lay awake in bed. The taste of the overcooked chicken from supper still stuck in her throat. Is everything in Texas bone-dry?

Like most nights, she comforted herself with thoughts of her parents. Not that she really remembered them, just images of a life that flashed into her mind. A time before she came to live with her aunt. I wonder what they were like? As much as she tried, her efforts were sometimes followed by the same frustrating thought. Why would they leave me with her? This brought on a little bitterness that she quickly dampened with rationalization. They had their reasons.

Lately, Julia had been reluctant to fall asleep. The dreams had come more frequently over the last few months…and had become darker. Not the same exact dream, more like a sequence of dreams, as if she were watching a TV series. They had begun two days after her first period which led to monthly dreams for the first year that matched her menstrual cycle. Then twice a month, increasing to weekly until now, five years later, in her last year of high school, they came almost every night and even in the middle of the day.

The dreams involved a castle and surrounding lands. People dressed in antiquated clothing. Some of the men wore swords. The early dreams were of celebrations and outings in the countryside. Unlike her, the people seemed happy.

And dragons! A few were always around the castle in an area set aside to house them, while others were free to travel to and from nearby mountains. Over the last month giant hawks, a third the size of the dragons, had attacked travelers on the road and could be seen from the castle, though at a great distance.

Of late, Julia’s dreams had centered on the silver dragon and its rider, more so than any others in the castle. It was as if she was being called, pulled toward them. The more Julia focused the wearier she became. After a wide yawn, her eyelids lowered slowly. She fought against sleep, but her breath became deeper as her thoughts faded away.

The murkiness of sleep lifted, and the dream filled her thoughts again.

For the first time, Julia found herself far from the castle. She looked up into an overcast dawn sky as morning broke over the forested foothills. It was the same sky as in the classroom daydream. The silver dragon dropped through the bottom of the clouds, twisting in the air to avoid the four hawks that attacked it.

In her dreams Julia had only seen the massive hawks at a distance. She had not realized that men rode upon them. At least she thought they were men. They were still far away but were coming closer as the silver dragon dove toward the ground.

Two of the hawks plunged toward the dragon’s back, while the other two approached from below, flying just above the tree tops.

Using its claws, the dragon easily fended off the two flying creatures attacking from underneath.

Julia realized the lower hawks were simply a diversion.

The first of the diving hawks came at the silver-armored rider with its talons spread. As it plummeted toward the dragon, the hawk’s rider held out a long lance pointed at the rider.  If the spear didn’t pierce the dragon rider; the hawk’s talons would tear him apart.

She was surprised when the man rose to stand on the dragon’s back. His hair whipped in the wind as he drew a long sword from over his back. The blade flashed and sizzled like a bolt of lightning as he held it over his head with both hands.

A heartbeat before the lance reached him, he leapt. While he rose more than fifteen feet into the air, he swung his sword down and then back up in an arc. The blade cleanly severed the tip of the lance as he soared another half-dozen feet past the hawk. The man twisted. The movement brought the sword around with increased speed. When it struck the hawk’s rider it sliced completely through his shoulder.

The silver dragon beat back the lower attackers and flipped over to strike out at the hawk as the dead rider flopped about in the hawk’s saddle. The dragon’s claws ripped through the attacking bird’s neck, spewing blood across the brightening sky to fall like rain on the trees below.

The dragon rolled over as the man fell, and he landed along the massive creatures back.

The rider hit hard and was thrown to the side and began to slide off. He hooked his free hand around the hard ridges running down the dragon’s back. He pulled himself up and started to run up the dragon toward the saddle situated where the neck made the dragon’s body

Julia wanted to cheer, though she knew nothing of the dragon or its rider.

Her elation was short-lived as the second diving hawk attacked. The man tried to twist out of its path, but a talon swept across to bat the rider up and away. His blade flew through the air ahead of him.

The dragon’s head lowered, and it darted downward as it sped after its rider. The hawk shot past and had to veer abruptly to avoid colliding with the tall trees.

The silver-armored man fell. His body flopped about, buffeted by the wind. He appeared to be unconscious—or worse.

The dragon swooped down toward the sword.

The dragon had four thick legs with clawed paws, but also running along the front of the wings were what appeared to be arms. At the end of each of these limbs was a thumb-like appendage and four long talons.

It seized the weapon with the talons protruding from the end of the wing. It then grasped its rider with its rear claws before the man crashed into the tree tops.

For a short distance it rose just above the forest canopy then dropped down and disappeared from Julia’s view. A moment later it rose again and winged steadily toward the distant mountains with the captured sword easily visible. The three remaining hawks chased after it in vain, unable to match the dragon’s speed. 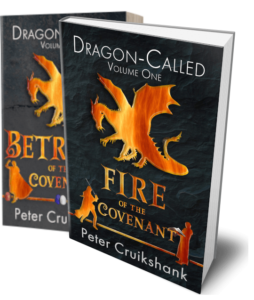